did you know? By Ronda Winn-Roberts

Isla Mujeres had a hanger in the mid 70's?


Temo Zurita (moderator of Recuerdos de Isla Mujeres) explained that it was built by the Navy for Coast Guard planes called "Albatros", but was never really accepted by the population because they were poorly informed about their use. Due to the bad oxidation and weather, the fleet was  relocated after some years. Commentators note that one plane was left on the island to be dismantled & and they remember playing in it. Some comment about people disliking the noise when they took off and landed. Others write about being fascinated by the planes. People recall a plane going into the bay, and one says there was an engine fire when a plane was in flight, that was put out by fire extinguishers. Luceli Pastrana says her dad is alive because of one of the Albatros airplanes. He was found at the school where he worked, having fallen, and one transported to Merida. She writes, "If it hadn't been for those planes, we would have lost him in the mid 70's" (Source, Recuerdos de Isla Mujeres Sept. 2011)

Isla mujeres had a park with a little ferris wheel and cement animals (a hippo, giraffe, & gorilla)?

Did you know....
Nautibeach looked like this when it was brand new? 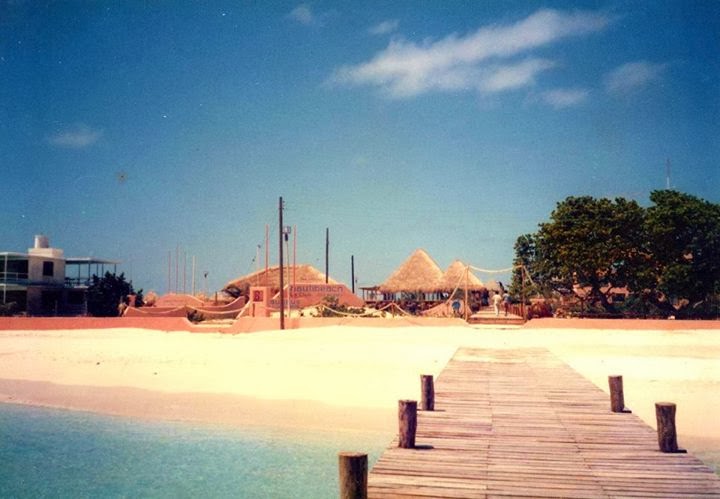 And the Northwest corner of Playa Norte looked like this in the mid 70's.....
(The intersection of Playa Norte and the Posada beach, once called Sergio's Playa Sol)


Isla Mujeres had "hammock hotels" & a movie was shot here in the early 80's?

...And Juarez looked like this (the one way street between main street and Hidalgo)

that Bad Bones, then Yaya's were on the corner, before JAX?

Did you know.....
This was El Domo & used for social events?

that Isla Mujeres had a movie theater in the 50's?